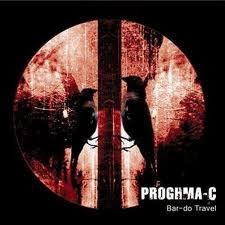 
In this 2009 release from Polish band, PROGHMA-C, self-proclaimed “musical evolutionists," I have found my favorite metal album of all time. Most songs feel as though I’m hearing the rhythm section of TOOL with lead guitar work akin to U2’s THE EDGE Evans, keyboard work reminiscent of VANGELIS in his 70s, 80s, and ambient/New Age soundtrack era, and some of the most diverse vocal stylings I’ve ever heard on an album—coming from lone vocalist extraordinaire, Piotr 'BOB' Gibner. Gibner’s screaming/growling is actually fitting, melodic, and easy to decipher; his narration on “FO” is awesome, and his versatile singing voice crosses between that of MAYNARD JAMES KEENAN, MR. BUNGLE/FAITH NO MORE’s MIKE PATTON, and DEPECHE MODE’s DAVID GAHAN. In short, this is a sadly overlooked, under-appreciated album that must be rescued from obscurity.

1. “Kana” (9:05) opens with some odd electro/world sounds before an awesome mix-meter rhythm section settles in. The treated vocal has a very cool TED NUGENT feel to it until the growling begins. Around 1:30 the music switches to muted guitar/bass rhythm with ‘BOB’ Gibner’s vocals taking on quite a Maynard James style and feel. But it’s such an awesome combination! The “chorus” is really a full-frontal return to the opening themes. Then in one of the band’s trademark surprise twists, the lead guitar stars doing some Edge/Adrian Belew like playing. With the return to the B section I notice for the first time the David Gahan timbre in BOB’s voice. Such an awesome voice! At 4:22 another unexpected turn occurs with an almost POLOICE “Synchronicity” section—definitely a jazzed up, ANDY SUMMERs-like lead section. 5:05 we return to the original rhythm but broken down to such sparse sound with snare, hi-hat and guitar doing their syncopated odd metered rhythm. Then at 6:03 enter the eerily echoing and slow decaying slow guitar arpeggios—like something from an Eno Ambient album—and yet the metal rhythm section continues! This is simply incredible music! These guys truly are innovators and “musical evolutionists.”  I urge all of you to at least listen to this first song—it’s available on YouTube (as are all of the album’s songs as well as the album as a whole). (10/10)

2. “FO” (6:40) opens with some awesome Edge-like guitar play before Gibner’s slightly treated voice begins reading/reciting a narrative in English. At 1:28, the music breaks, some odd percussives fill the space, then we return to the odd-metered syncopation and vocal narration for a little while longer, until at 2:08 the growl-screams take over. Then, surprise!—at 2:42 a soft, beautifully sensitive voice similar to that of MARIUZ DUDA takes over the singing. But this guy is better! He has such amazing control and the ability to do some shockingly subtle things with his vocal instrument! At the four minute mark we are treated to a bare-bones breakdown of the rhythm while a BLADE RUNNER-like horn-synthesizer slowly shifts its pitches while at the same time At 5:14 all but the drums disappear while a series of slowly strummed chords fill the center while odd spacey synth noises float around behind and around. Incredible song! Incredible ending! Another song I URGE you to listen to! (10/10)

3. “Spiralling To Another” (9:31) opens with some very spacey, etheric guitar play before the familiar syncopated, mixed-metered rhythm section establishes itself. Gibner’s voice enters with his Mariuz Duda sound—yet so much more sensitive and emotional. At 2:52 it gets heavy and the growling crashes into the field—but it never detracts or overwhelms the incredible music going on and lyrically can still be understood. Guitar chords strummed singly Then the music seems to ‘get stuck’ as guitar notes, bass line, cymbol play and choppy vocal play. A return to rapid rhythm sets up for guitarist Parweł 'SMAGA' Smakulski to do his awesome EDGE EVANS stylings. At 7:22 the full-force barrage of rhythms and growl/screams returns while SMAGA continues his trance-like guitar strumming. At 8:20 the music turns full metal, feeling like a TOOL song playing into infinity—then it stops! Another awesome song. While not quite as good as the first two, it too deserves a (10/10) in my opinion. (The other two should be turned up to eleven.)
4. “Spitted Out” (1) (3:20) establishes itself with another heavy complicated rhythm—this one sounding/feeling quite like a FAITH NO MORE song. At 1:30 the vocalist enters with his growl/screams. 20 seconds later he switches to more normal screaming, again, not unlike the rap-styling of FAITH NO MORE’s MIKE PATTON, before returning to growls. (8/10)
5. “Spitted Out (Out)” (3:57) is the album’s second (part? or version?) with this title. It starts out with a completely different sound—establishing a kind of KING CRIMSON “Discipline” weave amongst its musicians. Slowing down, breaking it down, speeding it up--the band toys around with the riffs and beat before letting the SMAGA break out with a proper metal electric guitar lead (the album’s first!) Though nothing earth-shattering, the guitarist’s confidence with bending the song’s key to his chormatically shifting scales is noteworthy and admirable. (9/10)
6. “So Be-live” (5:48) opens with a fade in with electric (Fender Rhodes?) piano and jazzy bass and drums and finger icked electric guitar parts weaving into a slow and methodic tapestry. The whispery voice used by BOB is quite perfect for the litl and fluidity of the music. At 2:04 the music shifts toward the now more familiar TOOL-like rhythm structures. BOB’s “Duda voice” gives this section a very RIVERSIDE-like feel. But then--surprise!--the distinct shift to the DAVID GAHAN voice occurs as synth playing portamento in the background toys with the song’s mood in a VANGELIS-kind of way. Then—wow!--growl/screams take over and add an amazing intensity to this incredible song! (10/10)
7. “I Can't Illuminate with You” (2:29)  opens with what sounds like a sustained note being bowed on the lowest ranges of a stand-up double bass. As the intro plays out it becomes evident—with the help of all the other BLADE RUNNER_llike “future”/space sounds—that the note is coming from a Vangelis-like synthesizer. The song, it turns out, is actually an intro to the next song, as it seamlessly bleeds into and becomes…

8. “Naan” (8:57) opens with another syncopated mixed-meter rhythm but this time the VANGELIS-like keyboards and playful JAN AKKERMAN-like rhythm work of the lead guitar pronounce something new and fresh. At the one minute mark all instrumentation merge into a 30-second single chord. Awesome. Then BOB’s sensitive Duda Voice enters to break the spell. The ensuing music scape is TOOL-like yet flittering about are the EDGE-like guitar effects. The vocals which follow are unmistakably DEPECH MODE-like. What an amazing vocal talent!! And an amazing lyric! So powerful! Not Duda, Gahan, Keenan, or Patton could hold a candle to the light of this singer! At 6:28 there is a shift into a discordant chord sequence with a whispered voice and syncopated snare and bass section. At 7:25 the music has evolved inot full band paly again, with BOB’s “Maynard voice” taking over. Echoed growls belnding into the cymbol play are the last vocals to be heard in this one. Awesome! Again! (10/10)
9. “Army Of Me” (Björk Cover) (6:33) opens with waxing and waning synth note—(sounds like a Prophet 5) before the standard Proghma-C/Tool rhythm track establishes itself. Then the vocal is introduces—understated and delicate—before an absolutely stunning multi-tracked vocal chorus is unleashed on us. Alternating back and forth from controlled single voice to , passing through empty spaces and synth-solo-dominated sections, we are treated to a song whose original version is both lost to me and immaterial. This is an awesome song no matter who wrote it! (10/10)

I don’t think I’ve ever given out so many 10/10s in a review before, but that's how highly I think of each song; this is a reflection of how much I enjoy listening to this entire album. One of my all-time favorite driving CDs. I do also want to mention how incredible I think the mesmerizing and yet tight is the work of drummer Łukasz 'KUMAN' Kumański and his cohort on bass, Michał 'VASKI' Górecki: they carry out the complicated, sometimes breathtaking rhythms flawlessly. Mega kudos, boys.

96.67 on the Fish scales = a five star masterpiece. This is one of those times that I wish I could post a rating of 6 stars—to indicate something incredibly special. The band claim that their music is intended to contribute to “Enhancing the palette of our musical universe.” I for one think that they are succeeding in this capacity. This is fresh stuff!  HIGHLY RECOMMENDED to ALL progheads!